Snow-themed plants for the beginning of FARCH... 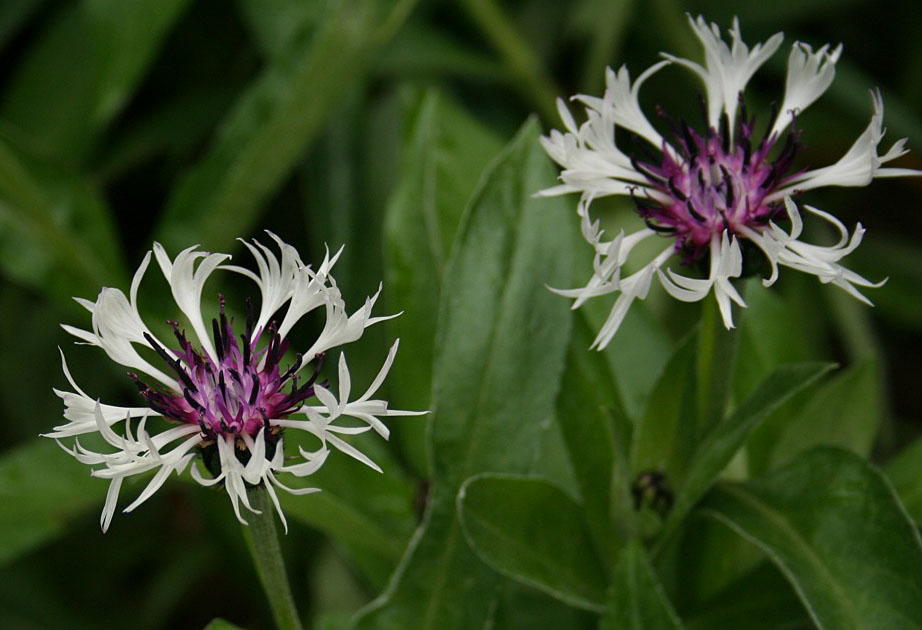 Depending on where you live in North America, yesterday's Groundhog Day prognosticator either saw his shadow or didn't (yeah, I know what I just wrote). I like what one person said, we can either focus on six more weeks of winter, or only six more weeks til spring. No matter how the groundhog called it, we have just entered that everlasting period of winter that I call FARCH, which begins on February 1 and winds up on 31 March, hopefully with some signs of spring unfurling.

To give us all a lift in winter (or to cool off our friends in the Southern Hemisphere, in midsummer as they are), some plants with "Snow" in their names, beginning above with 'Amethysts in Snow' centaurea. 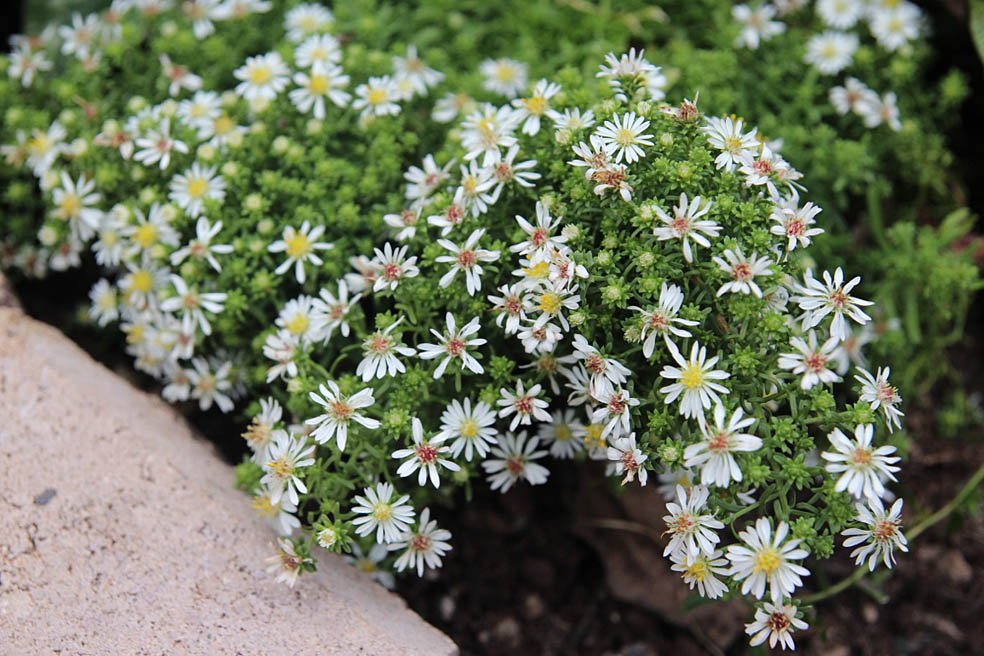 This is 'Snow Flurry' aster, a creeping species and variety of true aster. (Aster ericoides 'Snow Flurry'. I need to reacquire this perennial this spring, so I hope I will find it at a local nursery. It works beautifully in a rock garden, trailing over a wall. I wouldn't plant it in a walkway, though, as it wouldn't stand up to foot traffic. 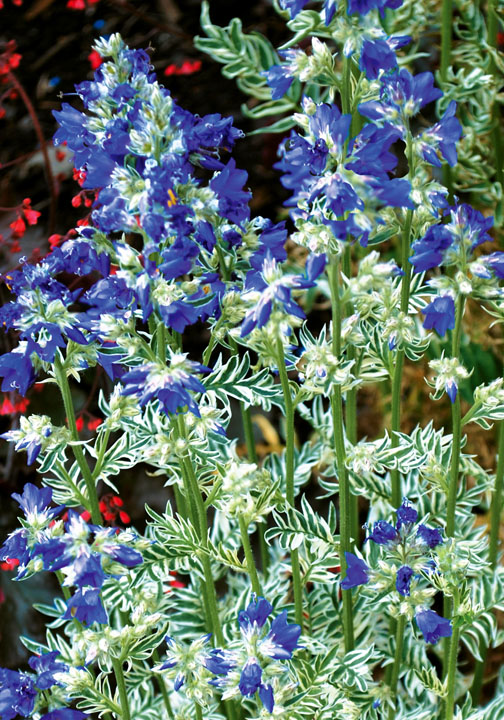 Jacob's Ladder looks especially fine when its blue flowers are contrasted by variegated foliage, as with Polemonium 'Snow and Sapphires'. This variety always did well for me in my former garden, but I also divided it every couple of years before the crown started to die out in the centre. 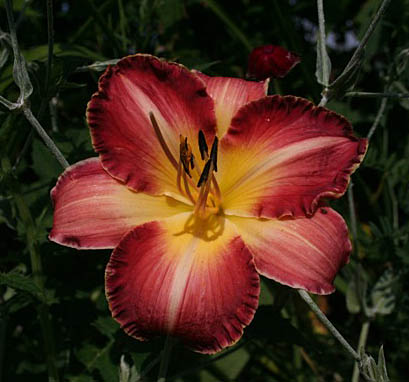 I love pretty much all daylilies, but this 'Roses in Snow' is one of my favourites, and one that did make the move here to the new garden. Incidentally, Nova Scotian daylily breeder Allan Banks of Harbour Breezes Daylilies and Japanese Irises in Jeddore, on the eastern shore, has introduced this new registered cultivars for 2014, including one for Rob Baldwin of Baldwin's Nurseries, and one for plant addict and garden geek me, too! 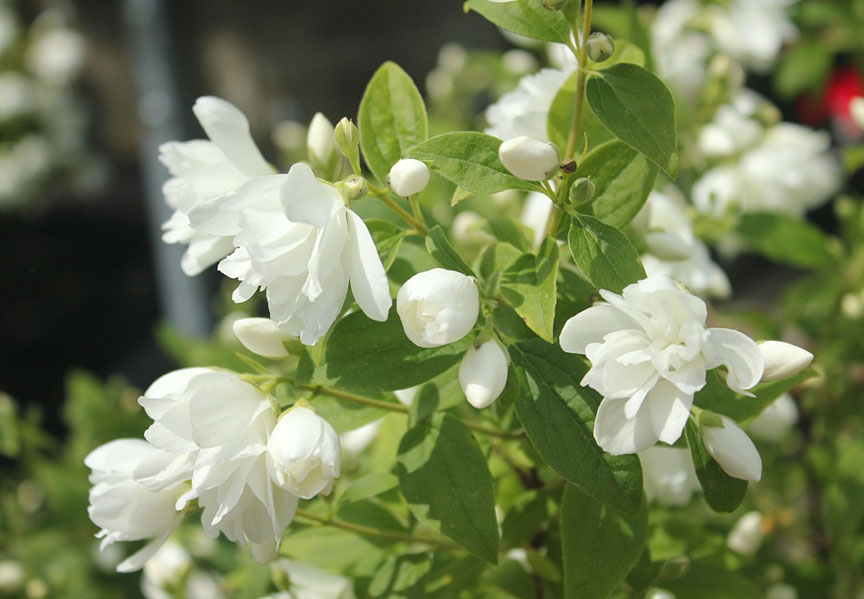 The fragrance of mock oranges (Philadelphus) is one of the true pleasures of a May/June garden, although many people don't like the old fashioned shrub because it can get tall and laggy. For a compact garden, choose 'Snowbelle', a dwarf shrub that rarely grows above four feet tall, and has double flowers, too. 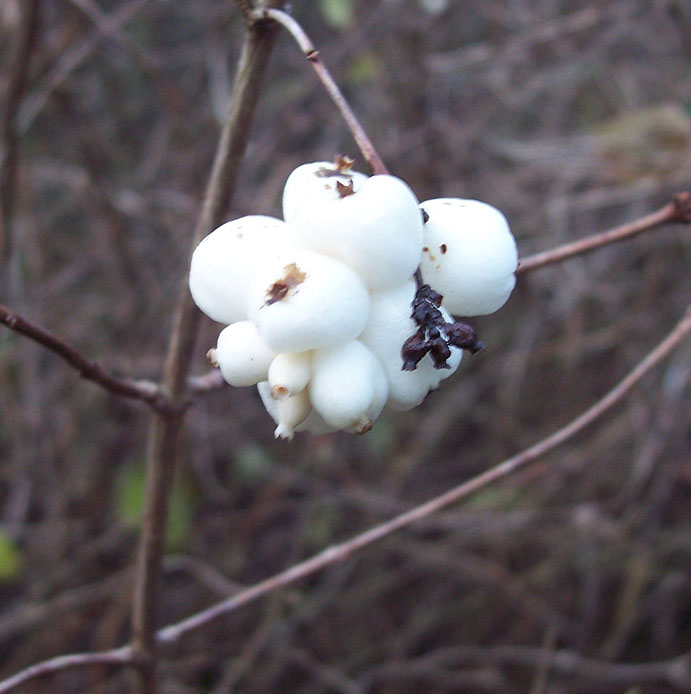 The old-fashioned shrub snowberry (Symphoricarpus albus) is a personal favourite because I love its waxy white berries. Often used in a hedge, the berries last well into winter, although birds will eat them. I used to stand at my bus stop in St. John's, waiting for the bus to take me to junior high and high school, and pop the berries on a hedge planted in front of the house by the bus stop. I still find that little habit irresistible, sort of like stepping on puffball mushrooms. 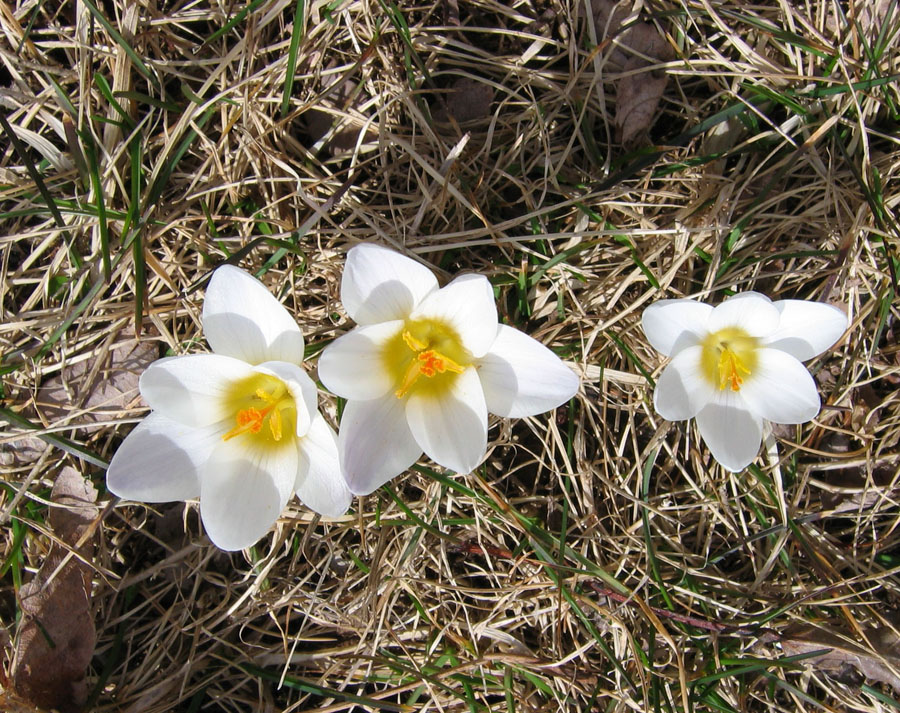 It isn't surprising that some of the earliest blooming bulbs have 'snow' in their name. This delicate little crocus is called 'Snow Bunting', for the dainty birds of the same name. 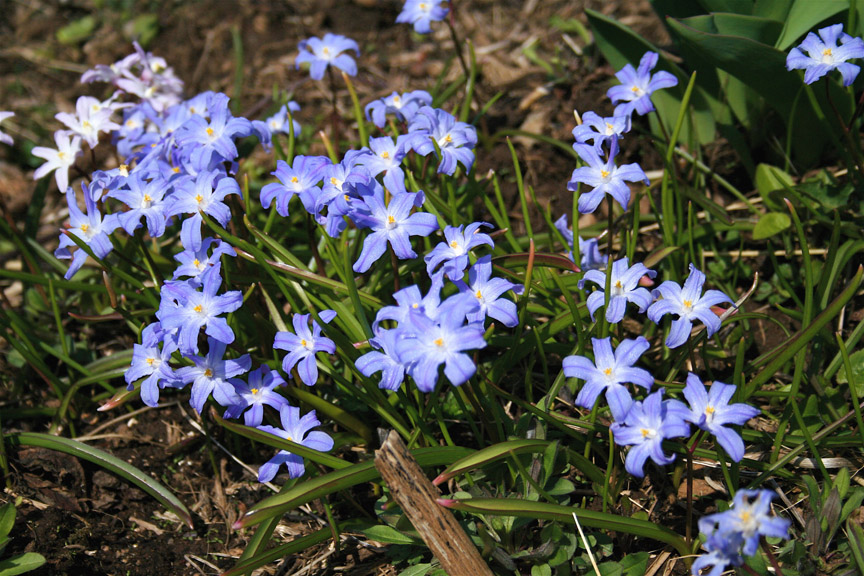 Glory-of-the-snow (Chionodoxa) flowers quite early in the spring, exploding with dozens of flowers in white, pink, or blue. It naturalizes very well and early-waking bees love this flower, too. 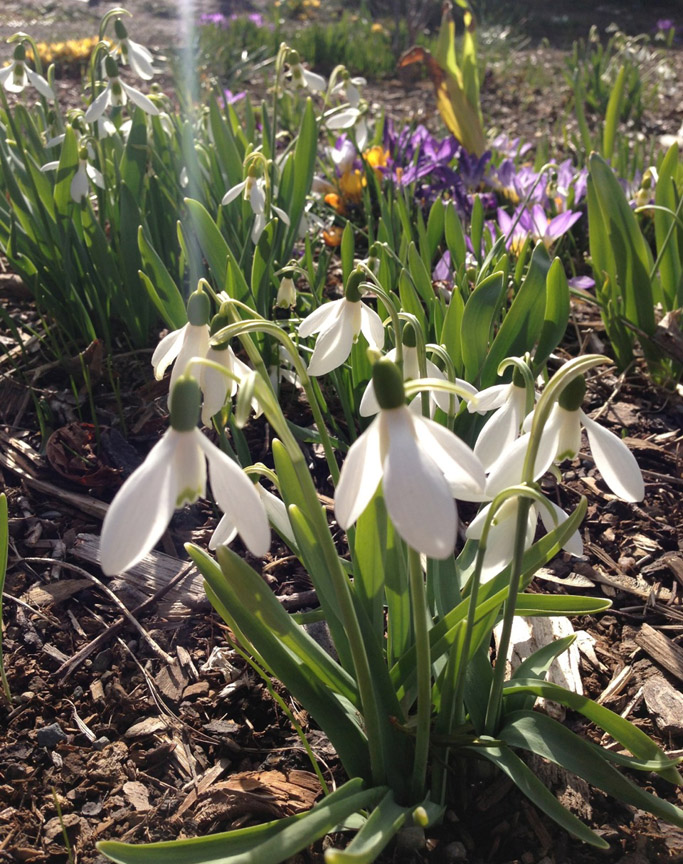 Of course, no discussion of snow-named flowers is complete without Galanthus, also known by the common name of snowdrops. These bloom very early, and in fact, I saw the shoots of snowdrops up several inches in a garden near Yarmouth, NS this past weekend. It's going to be a while longer up here in the Valley, as we are covered in snow again, with more supposedly coming midweek. Yay. Or not. Snowdrops naturalize over a number of years, but you can speed up the process by planting a couple of dozen more in your yard (including in your lawn) every autumn. 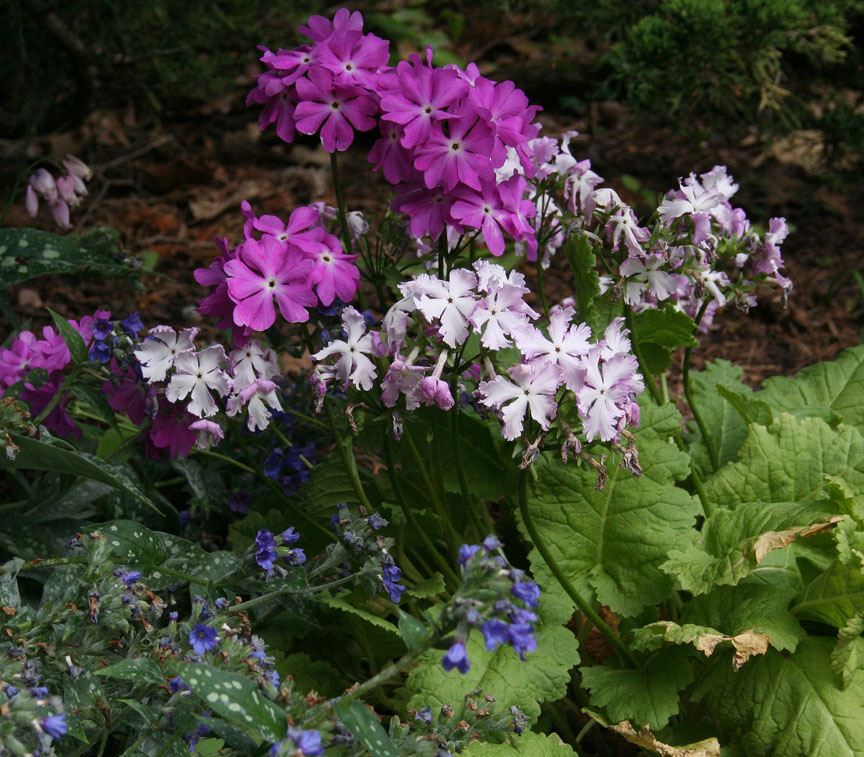 These primula (Primula sieboldii) are gorgeous for their deeply cut leaves, some with edged or frilled petals. I thought I had my own photo of 'Snowflake' primula, but I can't find it, so I'm showing these related cultivars, and you can see 'Snowflake' here. 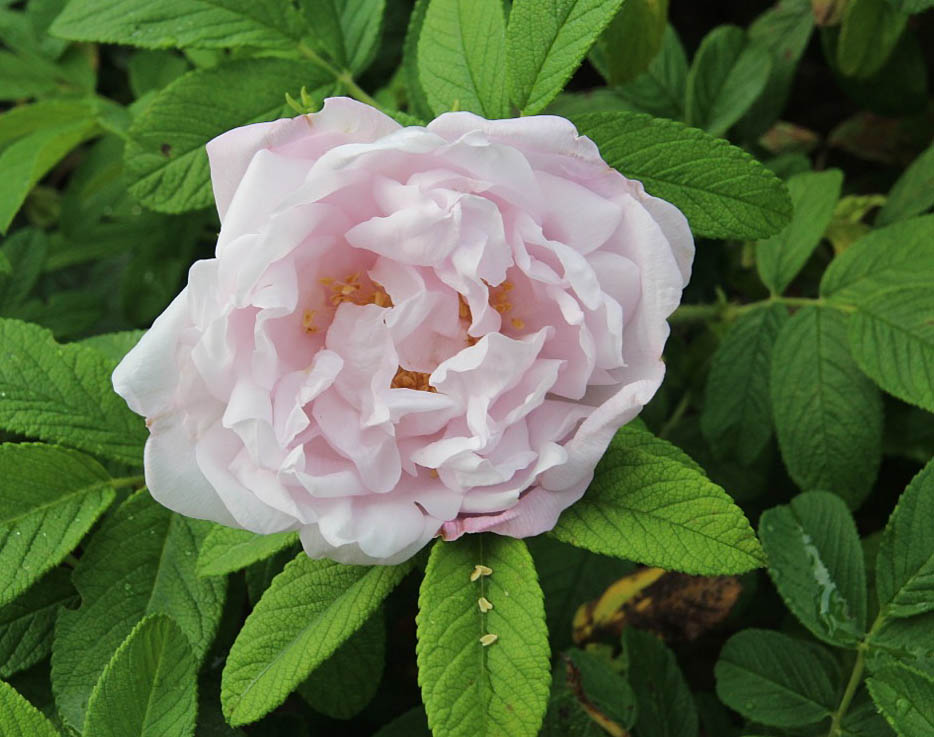 If I could only have one rosebush, this is the one I would have: 'Snow Pavement', also known as ''Schneekoppe'. It's a rugosa hybrid from the Pavement series of tough, salt resistant roses, so called because they are often planted in road medians or as hedges along roadsides. It is highly fragrant, and its lavender buds give way to white roses flushed with a hint of pink. It makes me instantly happy when it blooms. 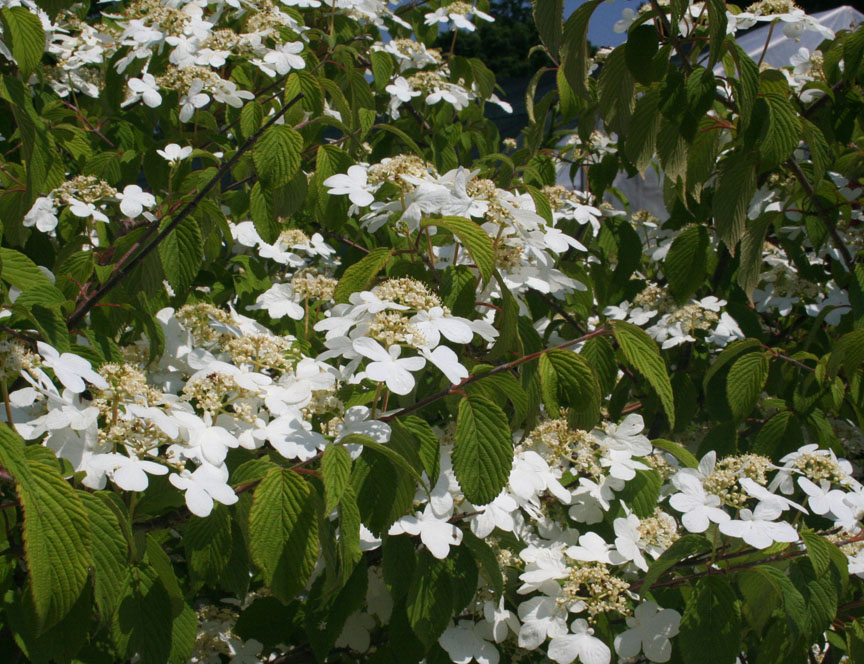 I am not going to mention the common snowball bush (Viburnum opulus) here, because I dislike it; usually covered in aphids or prone to viburnum leaf beetle, looking great while in bloom for about a week then turning to a dull green blob of leaves. Far better is the gorgeous 'Summer Snowflake' doublefile viburnum, Viburnum tomentosum plicatum. Its branches grow out horizontally from the central stem, and it covers itself in lacy flowers for weeks, often reblooming in late summer or early fall.

This is just a sampling of plants with snow in their names. Are any of your favourites here? Feel free to add other plant names in the comments, and maybe we'll have a followup post!