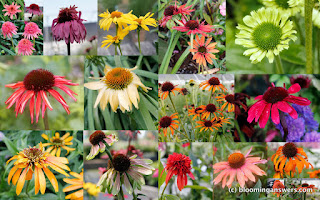 It's no secret to regular readers of bloomingwriter that I am hopelessly addicted to coneflowers. They've been putting on a show here in my garden, despite the dry weather, for the past 4-6 weeks, and while there's a bit of a pause right now, they are pushing new buds and preparing to show some more once we've had a bit more rain.

A few words about the weather, before I move on to talking more about echinaceas: July and August have been the driest months I've ever experienced in the 13 years I've lived here at my home. July wasn't so bad, but August saw so little rain, and so little fog, that even my 'lawn' pretty much stopped growing. And unbelievably, I stopped planting about 3 weeks ago, because the soil was so dry and I decided it was easier to tend plants in containers than drag the hose all around the yard watering them. We've had some rain now, but much of eastern Canada could use a lot more rain to bring up wells, irrigate crops, dampen down forests, and otherwise return things to normal. 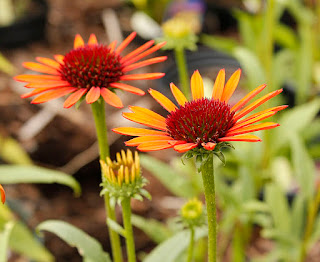 It's been a few years now since the 'new' colours began to come onto the market--I first saw the 'Meadowbrite' series at Canada Blooms the year I went (what year was that? Time marches on...2004, I think), and in the years since then we've seen a plethora of new cultivars revealed each year. I'm very interested in hearing what other gardeners around North America think of the rainbow of colours, their vigour and their durability.
Here's a funny thing: despite absolutely loving the red-orange varieties, I regularly mix up the names of a few of them. But this one is 'Flame Thrower', I know because I took its photo while it was with a group of its siblings at Blomidon Nurseries! 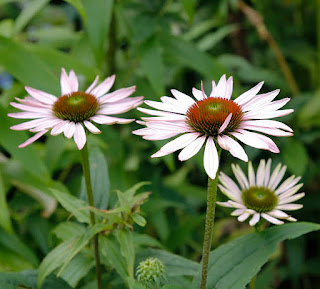 I wasn't sure if I liked 'Hope' when it first came out. It was too much like the regular coneflowers, I thought. But I've really enjoyed its flat flowerheads and the soft pink flowers with their green-to-gold cones are quite appealing. 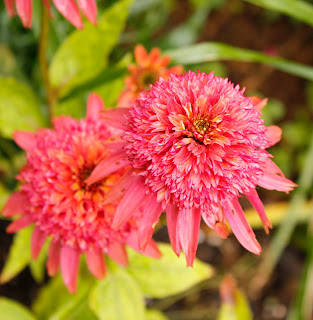 Ask a dozen gardeners what they think about the double coneflowers, and you'll get a variety of answers, from strong love to strong dislike. I am rather fond of them myself, but I wonder how much, if any, use they are to birds and other creatures that normally go to the coneflowers for food sources. This double is called 'Raspberry Truffle', and I really like it, better than I do 'Pink Double Delight' and the 'Secret' series from Terra Nova Nurseries. 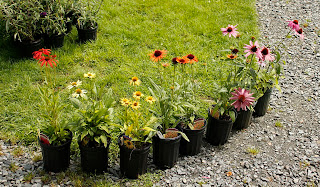 Most of our local nurseries are carrying a number of coneflower varieties now, from the faithful standard purple and white forms to the various yellow, red, orange, and green cultivars. 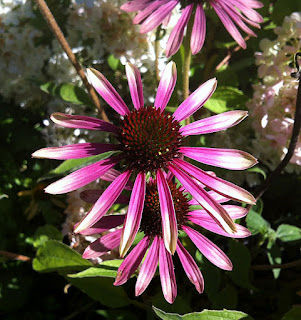 Here's something I've been puzzling over for a couple of weeks now. This is 'Green Envy', which used to be much more green in its petals than it is now, at least it seems that way to me. I wonder if some of these fancier varieties lose their colour vigour and will revert to their parentage. I still really love coneflowers regardless of their colour, but when one purchases something for a specific trait and the trait weakens or disappears, it's a bit disgruntling. Maybe it's the dry weather affecting them. 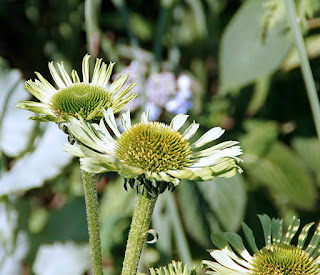 I have a deep and abiding fondness for green flowers, from the marvelous 'Limelight' hydrangea to 'Hummingbird Lime' nicotiana to amaranthus cultivars. This coneflower is called 'Green Jewel', and it's a dandy, and seems to be pretty vigourous to boot. It and 'Jade' were both developed by the same breeder, plantsman Piet Oudolf of the Netherlands, and one of the proponents of the "New Perennial" movement, which uses bold drifts of perennials and grasses in a planting. Works for me. I have found the Big Sky series of coneflowers to be quite reliable here in my garden, although I seem to have misplaced this one, 'Harvest Moon'. I have a very bad habit of not making maps or labelling areas of the gardens properly, so I can't tell which coneflower is which til they flower. And maybe 'Harvest Moon' is one of the ones not yet flowering. 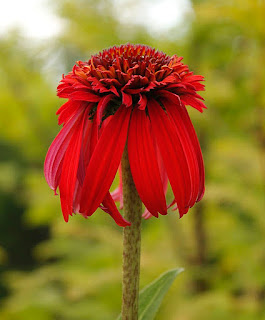 Time for a couple of the double coneflowers now. 'Hot Papaya' remains my favourite, hands down. Every day the petals and the central cone change hues, and this plant commands attention in any garden. 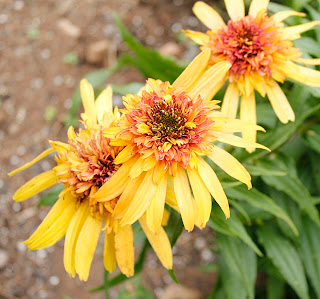 Although it's attractive and colour-changing as well, I am not as enthused with 'Marmalade' double echinacea. I wouldn't toss it out of the garden, but if it fades away I doubt very much I would bother replacing it. Colour is a highly subjective thing, as we all know, and many people rave about the colours in this coneflower. It's all good, so long as they do well for you. 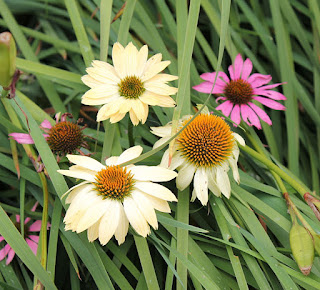 This is a new-to-me variety this year, 'Sombrero Sandy Yellow', and I am liking it a great deal too. Is there a lot of difference between this and Big Sky 'Sunrise'? I don't think so, but I could be wrong about that. Have any of you compared the two yellows for yourselves? 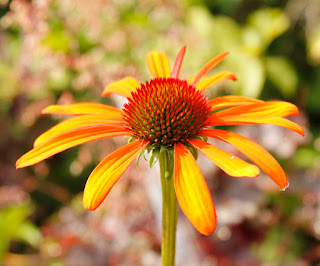 'Tiki Torch' is a brilliant orange, and I like it a great deal. It's close to the school-bus orange/yellow of some of the rudbeckias, but it really glows in the garden and usually has a lot of bees around it. 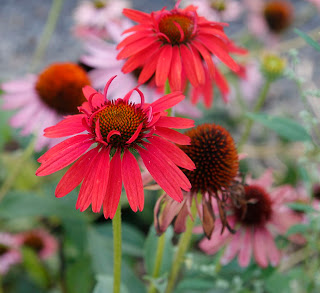 As far as I can tell, 'Tomato Soup' is still the deepest red of the single-flowered cones. 'Hot Papaya' might be the deepest red overall, but again, we could have great discussions about what constitutes red, orange, rose, purple...these shades are all somewhat subjective and it can be really hard to accurately describe a colour (think of daylily descriptions as proof of that!) Whatever the case, I love 'Tomato Soup's deep colour, and hope you do too.

This is only some of the coneflowers available--which ones have you tried, and which ones have thrived for you? Which haven't lived up to their billing? Over to you, dear readers!