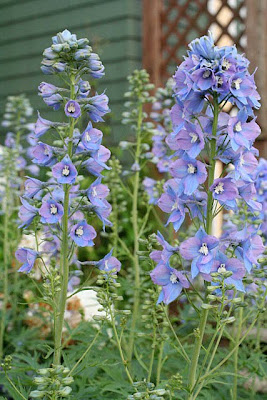 One of my favourite garden writers/designers/plant people is Dutch master Piet Oudolf. He writes in a very approachable way, his design ideas make perfect sense to me (where the writings of some others tends to obfuscate what they think they're trying to tell us) and he focuses on structure and texture as much as on flower colour. I am learning, slowly but surely, from reading his books and looking at gardens he has designed and talking to others who like his work. 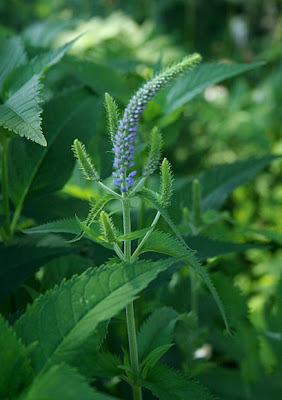 From him, I've been learning to focus as much on the shape of plants and their flowers as on their bloom and foliage colours. Right now, I've been intensely interested in plants with spike-like flower shapes. I can't give you the whole logic behind them other than they give a nice vertical effect in my gardens. And even the ones that are shorter than I am do that. The delphinium and the veronicastrum (above) are not shorter than I am. 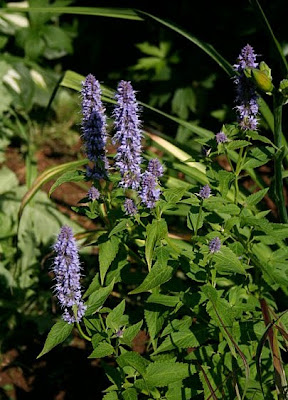 I have several different types of agastache, also known as hyssop and hummingbird mint, around the gardens. Waiting anxiously for 'Golden Jubilee' to come into bloom, but for now, the standard blue-flowered types are just fine. 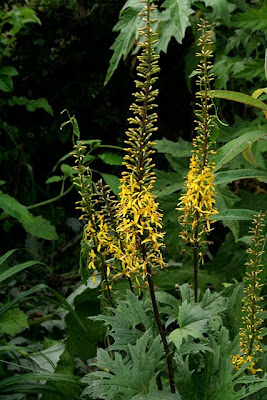 I have four different types of ligularia around the garden, including 'The Rocket', which is busily doing its thing, rocketing skyward with spikes of brilliant yellow flowers. Interestingly, some of the others, including 'Othello' and 'Desdemona' have larger individual flowers, not spikes like these. I'll show them off in another post. 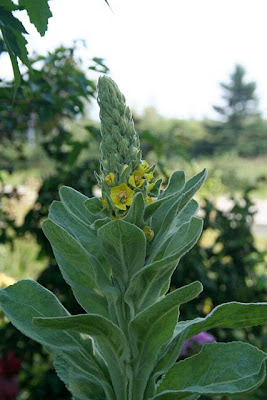 It's entirely possible that this is a wild mullein, as I don't remember buying this one. And I'm okay with that. Talk about structure! This plant's flower spike is taller than I am, and its velvety leaves are striking even when it's not blooming. The pollinators love this plant, which is good enough for me. 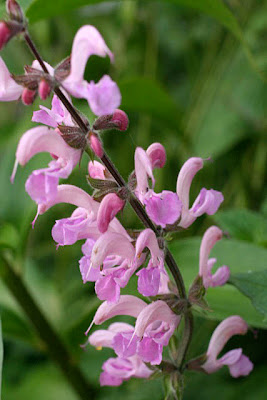 I have half a dozen hardy sages throughout the gardens, including this lovely pink one, the name of which has long ago gone into LoLa-land. 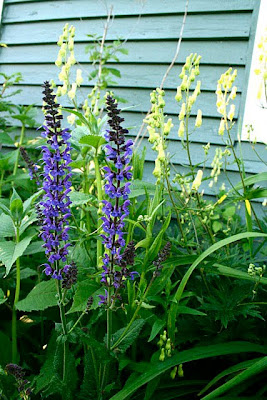 This purple sage is probably 'Mainacht' but I really don't know. What I do know is that it works very well with the yellow aconitum that flowers at the same time. Many of the sages will rebloom if you deadhead them faithfully. 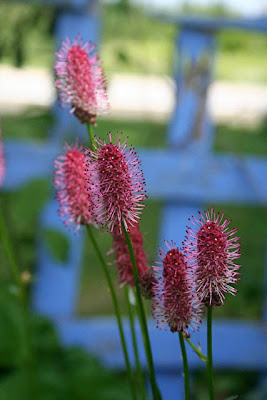 This is Japanese bottlebrush, or Sanguisorba. I have two different species, (or maybe cultivars, as they have LoLa too). They're real charmers and I think rather underutilized perennials. 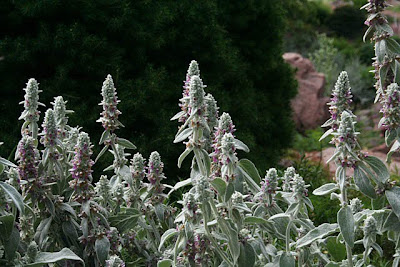 Some people cut the flower spikes off their lambs-ears (Stachys byzantina), because they think they're ugly. I find the bees like them so very much that I leave them on the plants until they are spent. (Disclosure: this is actually a clump at the Rock Garden at NSAC, not my patch). 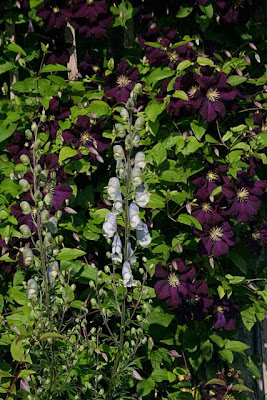 Despite the fact that aconitums are very toxic and should be handled with care (such as using gloves when working with them), they are one of my favourite plants. Mostly because I don't go around eating garden plants (for those who don't understand my sarcasm, media in my part and other parts of Canada have flipped out in the last week or two about giant hogweed, which has only been around here for about a hundred years or so, and IS toxic, and DOES spread, but people, have a little common sense...end rant) Anyway, to continue: I like monkshood a lot, for the shape of the plant's flower spikes, for the bloom colours, for their long-lasting appeal...this one is 'Stainless Steel', nicely framed against one of our rambunctious clematis. 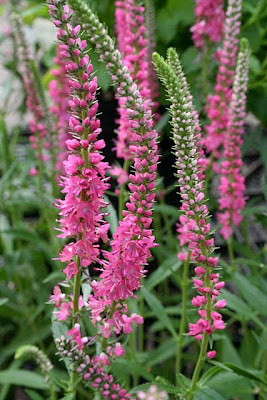 Veronicas are very nice plants for adding shorter clumps of vertical flower spikes and hot colour. Butterflies and bees and hummers love them too. This is 'Red Fox', possibly my favourite. 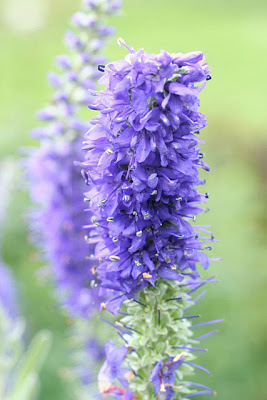 And this is wooly speedwell. I have several varieties just coming into bloom, including the new-to-me 'Purplicious', which is looking very promising for being a flower colour between pink and this blue-purple. 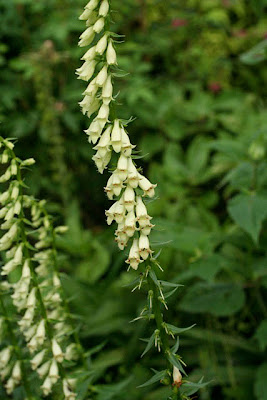 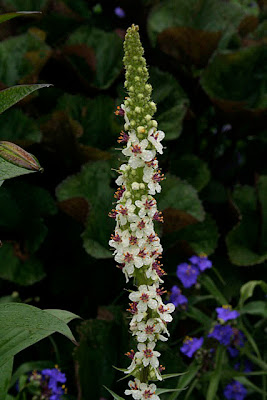 This white mullein, (Verbascum) has been in the garden for about ten years now. It pops up here and there from seed, and is beloved by my precious pollinators, and is an easy perennial to grow for me. So what's not to like?