Buyer Beware: When a Perennial isn't, and other warnings 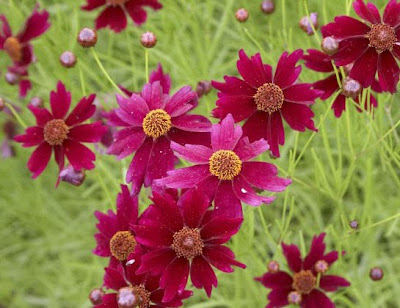 It all began with 'Limerock Ruby' coreopsis. Remember when we saw that little charmer, with its reddish-rose flowers, and read it was hardy to zone 5, and we all rushed out and got it, only to have it die?
Now it's listed as zone 8, or a tender perennial. Funny about that. Unfortunately, I still see nurseries around here selling it as a perennial--and charging top price for it. 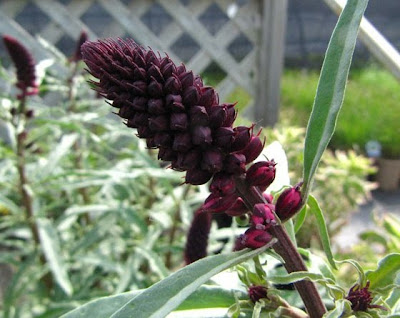 Plenty of us sent up a cheer when we first saw Lysimachia 'Beaujolais' because it's so gorgeous a goosenecked loosestrife, with its deep wine flowers and blue-green foliage. Only one problem...it's not reliably hardy in Nova Scotia. Yet it's being sold here as a perennial, despite the fact that the most reliable sites I could find have it hardy to USDA zone 6, AND I've had friends in zone 6 have it die on them, too. We don't have to worry about it being a rampant spreader--death over winter takes care of that. 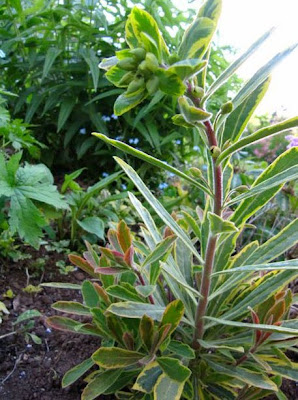 Let me tell you a bit about hardiness zones throughout Atlantic Canada. Most of us are in zone 5a or b; some are even cooler, zone 4 or even zone 3; a few localized areas such as the south shore of Nova Scotia (the banana belt, as it's fondly referred) or some microclimates are zone 6, and even fewer microclimates (as in someone's sheltered back yard) MIGHT stretch to zone 7. Might. Most of us think we're pushing it if we try to grow something labeled as zone 6. I'm zone 5b , with erratic, annoying winters, freeze-thaw cycles, usually-late springs and awesome autumns.
So seeing this euphorbia 'Ascot Rainbow' and a similar striking one, 'Tasmanian Tiger', sold in Nova Scotia when they are zone 7 plants didn't make me very happy. 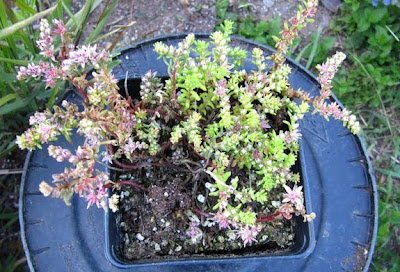 Likewise, this 'Sea Star' stonecrop is given a variety of ratings; MOBOT says it's hardy to zone 5, which would be delightful, but other sites rate it as frost-tender as zone 8. 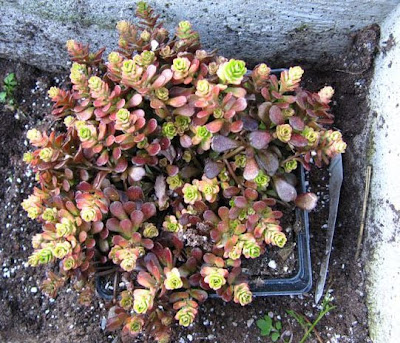 And what about Sedum 'Salsa Verde'? It's rated as hardy to 6-7 depending on where you read about it, so it might come through a winter here with protection. However, I like it and 'Sea Star' so I've put them both in a trough planter, which I'll bring into the greenhouse for the winter.
Now, let's be clear: I BOUGHT both sedums and both euphorbias at a couple of garden centres, but with the knowledge that they wouldn't be hardy in my garden. Because I had read about them in various sites, and because they were on sale so they actually cost less than a patented annual like the Proven Winners plants. I don't mind paying 3 bucks for a plant and having it not overwinter.
What irritated me, however, was that these plants were not even labeled as to their hardiness.
The little plastic tags that came with them gave no sign of hardiness at the places I bought them (although I did see Ascot Rainbow at another nursery, with its label showing its hardiness zone, and significantly higher priced to boot). 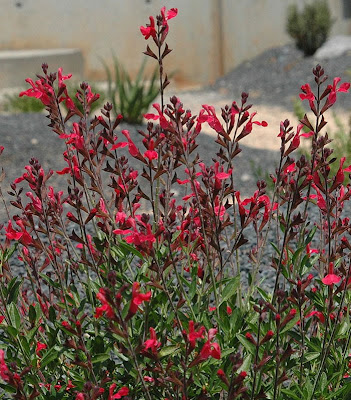 For inexperienced gardeners who either don't recognize that the plant isn't hardy, or can't read a zone rating, they're getting fleeced. Some of these places ought to know better, while others, I put it down to a lack of caring/knowledge. But there can also be legitimate mistakes. Like when I saw some aeoniums and echevarias being displayed in the perennial section of one place, next to the sedums and sempervivums, I quietly told the staff that the plants weren't hardy, and they were moved accordingly. At another nursery, one I know well, they had similar succulents BUT also had signs beside them stressing that they are not hardy in our area.
Then there was a salvia similar to this one, being sold at this one place that isn't exactly reputable--not a bigbox store, I hasten to add, but a 'chain' of related garden centres that uses a relative's name in its different incarnations. Well, I don't care if you're uncle, farmer, or cousin, a zone 8 salvia isn't going to flourish in Nova Scotia and shouldn't be sold as a perennial. 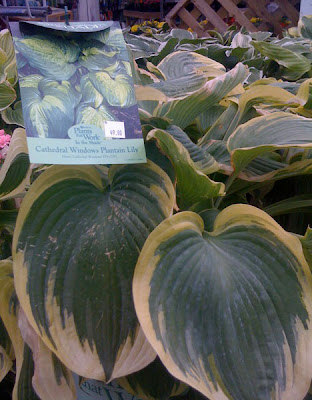 This same place had 3-gallon, overgrown (looking hydroponically force-fed) hostas with enormous leaves. I mean enormous. 'Cathedral Windows' is a nice hosta, with good sized leaves (10 inch long, 9 inch wide) but these were much bigger than that. And the price was equally inflated. Who is going to pay 49 bucks for a force-fed, probably grown-in-the-southern-US hosta they can get elsewhere for at most $20? I took this photo in late May, and one of my hort-spies, who was in that place late last week, reports that the plants are sitting unsold, their leaves turning brown and crispy. They also had heucheras that were equally overpriced and overgrown-looking; granted, one of them was Southern Comfort, which does boast large leaves, but there were also 'Palace Purple' plants with leaves the size of a big maple leaf. These plants, too, were dying. Big surprise, that.
Let me also stress, none of these were being sold at bigbox stores, which I don't frequent except to buy plant containers or occasionally annuals--from the Canadian owned stores, not from WallyWorld or HomeDespot. These plants were all being sold at farm markets, garden centres, and other such places around Nova Scotia, and at more than one of them I have brought the questionable hardiness to the attention of staff, some who have been good about correcting the situation, others of whom apparently don't care.
The thing is, if people like me want to buy plants like these and try to push the zone, that's fine--it is a game for some of us, after all, and some of us are very good at it. And sometimes a plant is rated for zone 5 but it can't deal with our particular winters with our freeze/thaw cycles, and that's fair enough too. We've learned that the 'Meadowbright' coneflowers don't thrive here, despite being bred in Chicago, but the 'Big Sky' series do just fine. I buy lithodora every spring because I can't resist its cobalt blue flowers, treat it like an annual because it's marginal with my zone and winter, and that's also fine. I mostly know what I'm doing, and it's also my job to test out plants and let others know what my experience is.
But if someone who is just starting out buys a few of these either unhardy or overgrown plants, paying high prices for them, and then have them die--that's discouraging for the new gardener. And to my mind, it doesn't build a business's reputation, but gives them a bad one. 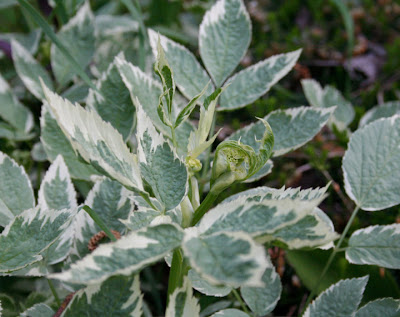 In a recent article about garden pests, I suggested that people ought to boycott nurseries that sell goutweed/bishopsweed, knowing full well that it is an invasive, noxious plant but not warning customers of this trait. The particular publication edited out that sentence, probably afraid they might lose advertising dollars even though I didn't name names. But this being my blog, I will still suggest that if you see it offered for sale, you ask the nursery operator to remove it or else you won't buy plants there. I do know that several good nurseries have stopped selling it (and others never did have it) but it's still around.
What about you? Have you encountered much of this sort of thing where you live?