Making a Complete Aster of Myself 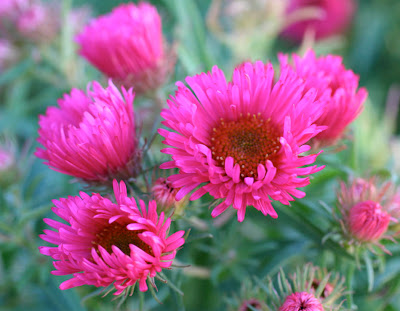 It was something of a shock to discover, a few years ago, that I had fallen in love with asters. Not only that, but the love affair continues to grow and flourish. And become even broader based than I had dreamed possible.

Let me qualify that. I fell in love with the perennial, fall blooming type of asters, whether they're tall or small, blue or purple or magenta or hot pink. I've never grown annual asters so I really can't comment on them, other than to say I like their colours. But over the few years, something has clicked in my head where perennial asters is concerned, and I can't get enough of them. 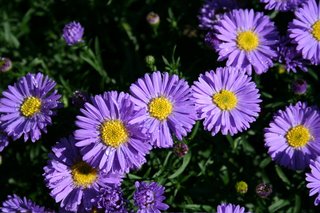 This wasn't always the case. My first contact with these plants was with the wild varieties--of which there are myriad. In Nova Scotia alone, there are 18 native species (of a total of 175 species of asters in total, most of which are native to North America). Some, such as the New England and New York species, hybridize with great enthusiasm, and it's hard to tell one from another without quite a bit of skill. 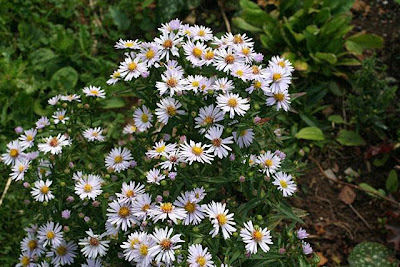 I know how many native asters there are in this province because I consulted Roland's Flora, the revised and updated version of The Flora of Nova Scotia, written originally by A.E. (Doc) Roland and E.C. Smith back in the forties. I've mentioned Doc before in postings; he was a professor of botany at the Nova Scotia Agricultural College, and a plantsman par excellence. When I arrived at AC in the late 70s, Doc had just retired but maintained his office in the biology department, and came in daily--sometimes to play chess with one of his colleagues, sometimes to write, sometimes to answer questions of students like me, who would drag in all sorts of plants or parts of plants and wonder what they were. 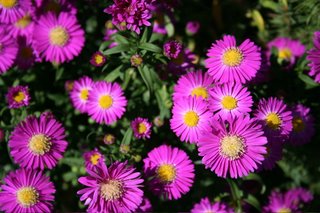 Doc was the only plant enthusiast I've ever met who could glance at a fragment of a plant and tell you instantly the genus, species, subspecies, and if applicable, cultivar. He was a whiz with asters, and if memory serves he had a particular interest in them. He was and still is one of my hort heroes, and along with his colleague Lorne McFadden, encouraged my love of botany and of growing plants. But when I worked one summer helping to build the NSAC herbarium of native and naturalized plants, our wild asters gave me headaches as I couldn't tell many of them apart. 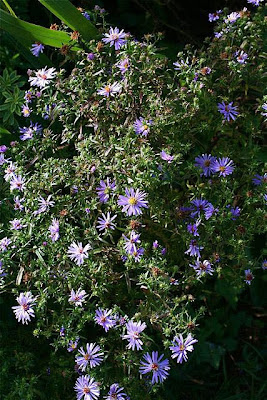 Flash forward to today, jodi the gardener as opposed to jodi the botany student. I don't know how many times I've planted cultivated asters--alpine varieties, tall varieties, medium varieties--only to dig them up the following season, thinking they were weeds. And by the same token, I've cultivated impressive clumps of tall white aster, wood aster, heartleafed aster....all of which some would call 'weeds'...thinking they were the gorgeous varieties I had bought one place or another.

Or else the asters I HAD bought, supposedly the deep pink varieties that I coveted, would turn out to be...well, purple. Call it blue if you wish, but they're lavender purple to me--and while they're lovely, they weren't what I wanted at the time. 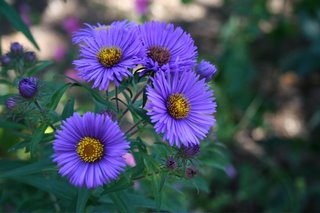 Finally, however, I got smart....sort of. Several years ago, I got a couple of tall pink asters from a friend of mine, planted them in a special part of the garden--labeled them carefully, and for good measure, took a picture of exactly where they were. The next spring, I was very patient, watching carefully as shoots emerged, resisting the urge to weed anything that might be an aster! I nurtured, and watched, and got excited as a clump formed exactly where I had planted one of my friend's and where the label though faded, still existed. Then I noticed another, bushier aster growing near the first, and wondered about that...waited and nurtured it and watched and discovered one day that it was one of the wild ones. I sent this plant rather quickly to the compost heap with a heap of bad language.

Then several local nurseries kindly brought in perennial asters, not only potted but in flower, so I could see what I was getting. I've also spent a good deal of time looking at other peoples' asters, as well as the wild ones. I've decided it doesn't matter what colour they are, or whether they're wild or domestic: I love them all, now. I've embraced the wild ones that pop up in the gardens, because butterfies, bees and other pollinators love them. So our garden is home to asters wild and cultivated, named and suffering from Lost Label syndrome. And I'm all right with all of them. 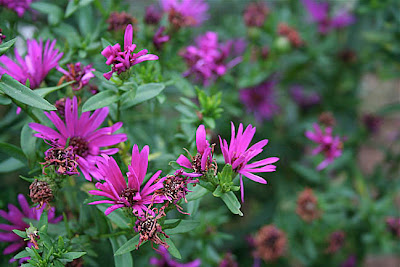 Some of the cultivated ones weren't named when I got them, so it's been amusing trying to figure out who is who; just about as challenging as trying to decide which wild species is which. I've decided this magenta cultivar is probably 'Jenny', because my sister has the same one. I think so, anyway. 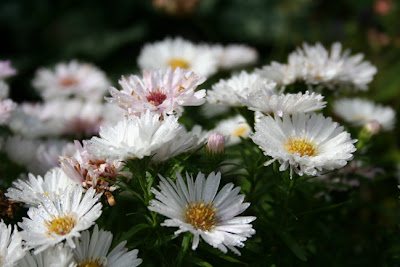 This is the unusual, white flowered Puff--unusual to see a white flower at this time of year, although there are creamy white wild asters in bloom on the roadsides. It's a nice fresh counterpoint to some of the more jewel-coloured flowers currently still in bloom. 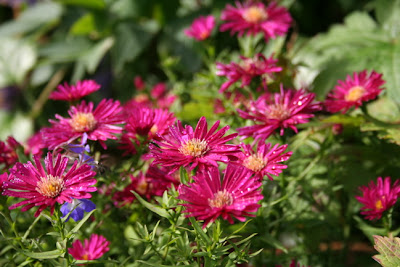 It's anyone's guess as to why this flamboyant deep-carmine marvel is named Winston Churchill, but it is. It's a low-growing type, or so far it is, and is making a really nice mound not far from Puff. The colour is clearer than the unnamed magenta variety I have, and not as hot-pink as Alma Potschke, a tall New England aster that may be my favourite overall. 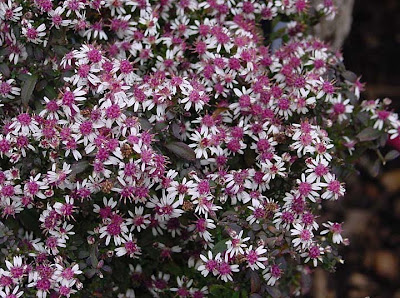 This is the unique and well-named Lady in Black. No, the flowers are not black, but the foliage and stems are a deep magenta-near black. The plant smothers itself in tiny flowers and rather resembles flowery fireworks. It's a hybrid of the wild calico aster (A. lateriflorus), which I may or may not have weeded out of the garden in the past. I admit nothing where asters are concerned, when it comes to having nurtured or weeded the plants in my garden. Not any more. 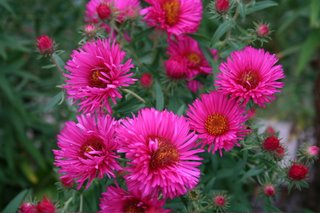 Although Alma Potschke falls over (and is amazingly difficult to spell), I forgive her because she is such a marvelously coloured flower. I call this hot-pink though you may call it fuschia or carmine or any of a number of other descriptive colours. It's not magenta--there are still lots of magenta plants flowering in my garden, but they're more like 'Jenny. My dear Dad would likely have called that particular shade 'murple', or mauve-purple. Alma he would have described as being peptobismal pink, no doubt. Whatever the case, I love Alma's brilliance-a perfect contrasting colour to all the orange and russet and gold and yellow and bronze of this time of year. I did shear some of the asters in midsummer last year, which resulted in them growing lower and bushier and producing more flowers. The trick is to remember to do the shearing at the right time of season, so as not to delay blooming too much. Or, as was the case this year...to get it done at all. It didn't get done, so I have floppy-aster syndrome.

At least I don't have to shear the wild ones. Or stake them, label them, or do anything but enjoy them. Which I'm doing in abundance. Others may call them weeds in my garden. I'm calling them pollinators and bird-feeders.
And calling myself a bit of an aster for not surrendering years ago.