Quite a year for Hydrangeas 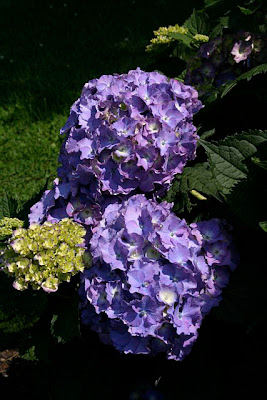 One of my favourite novels is one that came out some years ago by writer Bailey White. Quite a Year For Plums is a delightful read, (and a novel I re-read regularly), but I especially love the title, and borrowed from it because it seemed apt for this post. Hydrangeas have the Greek for 'water' (hydra) in their name, and this year, all the water we're getting seems to be inspiring them more than usual.
I don't grow mopheads as a rule (the exception comes below) but I enjoy seeing them grown well, and this year they seem to be exceptionally well-grown down along the Acadian shore of the province from Yarmouth, through Clare and up to Annapolis Royal. Most are blue, but in looking through my photos of the past few days (during which I was on a roadtrip with my mother), I realize I LOOKED at dozens of blue mopheads but didn't photograph ANY. I did, however, photograph some of the striking purple hydrangeas that show up around Yarmouth. 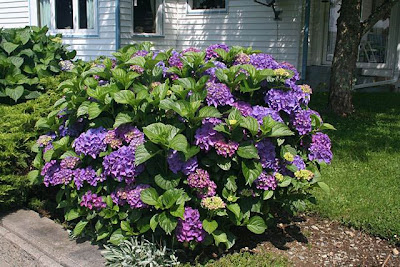 I first saw these about three years ago, and nearly went off the road gawking at them. And I first saw them in late October that year, when frost had affected them somewhat. Here, however, is what they looked like on Tuesday, showing off their purple colours beautifully. Hydrangeas will turn purple when the soil is not too acid and not too alkaline (and depending on the cultivar; deep pink or deep blue varieties turn the richest shade of purple). 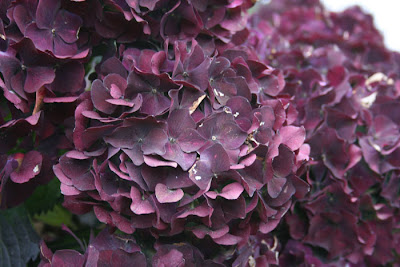 This is a flowerhead of the same hydrangea, taken three years ago in late October. They're astonishing, aren't they? 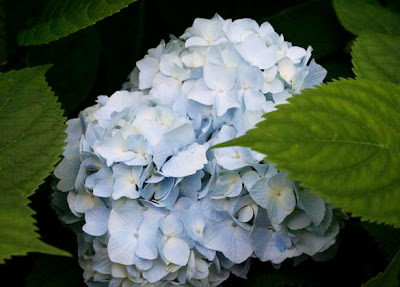 I sneaked a shot of this softly blue mophead hydrangea at the Queen Anne Inn in Annapolis Royal yesterday morning before breakfast. There weren't many buds on this one, suggesting that it's one that forms flower buds on old wood, and likely killed mostly to the ground during the winter-from-hell we had. 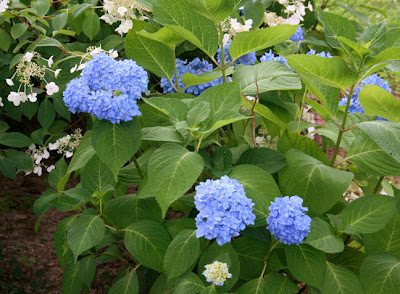 I highly, HIGHLY recommend the Queen Anne if you're staying in the Annapolis Royal area. It's one of my two favourite Inns in the province, the other being the Blomidon Inn here in Wolfville where they have a huge and wonderful display bed of hydrangeas, including this beautiful blue mophead. 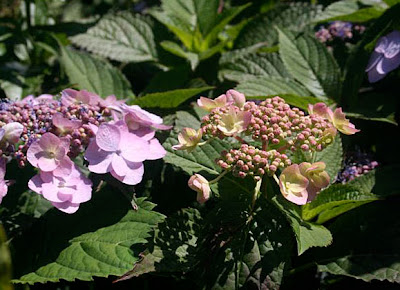 Back in my own garden, there are mostly lacecaps and paniculata-types, along with two suckering, exuberant Annabelle-type white snowball type hydrageas. This is a blue lacecap in need of some acidifying help in the soil. I think it's 'Blue Bird' because its foliage turns handsomely red in autumn; Rob Baldwin of Baldwin Nurseries gave it to me a few years ago with orders to cold test it. It's doing just fine, Rob! 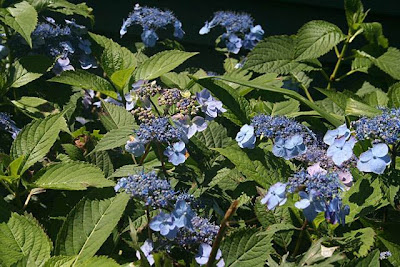 This is 'Blue Billows', another lacecap; it's in a different bed and is holding its blue petal colour just fine, thank you. The only problem with this shrub is that it hasn't grown as tall as some and is behind other, more exuberant plants. I haven't had the courage to move it. 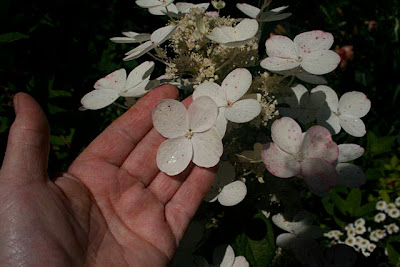 Along with the lacecaps, I'm very fond of the paniculata type hydrangeas, including Limelight (with green flowers). This is 'Quickfire,' the earliest paniculata type to bloom. As its flowers age, they will turn rosy pink, and they speckle as they turn from white to pink. The florets are really, really large this year. 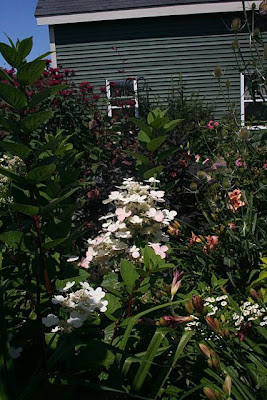 'Quickfire' is shooting up a lot of new growth and flowering at the same time. It'll flower until frost, or at least last year it put on a whole lot of new flowers in late summer/early autumn. I've been trialing this plant for several years and really like it. 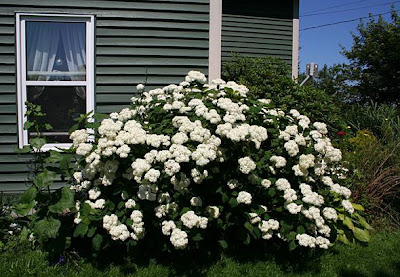 This is an Annabelle/snowball type (H. arborescens). It suckers a lot, and blooms like a mad maniac. I have two of them, and this one I cut back hard last year. It had only a few blooms last year. This year, it has exploded in size and in bloom. The other one got its pruning this year so it's only putting on a small display this summer at the other end of the bed. The flower heads aren't as large as 'Annabelle' but they don't fall over too much, either. 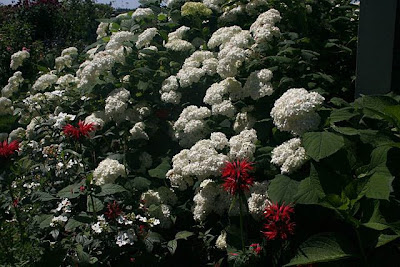 Another view of my snowball hydrangea, along with some Jacob Kline bee balm and the slightly-overwhelmed Viburnum plicatum tomentosum 'Mariesii' (doublefile viburnum) off to the left. On the right are the huge leaves of a plant I've loved to hate for a couple of years, but which is redeeming itself this year. 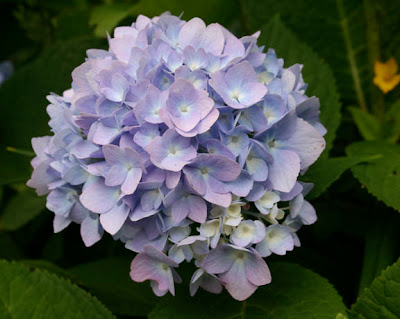 That plant is the mophead hydrangea 'Endless Summer'. I've loved to hate it because it's been sullen for a couple of years. Last year, I took the shovel out and warned it that it had one. more. summer. in which to prove itself, or else it was moving to the compost heap.
Well. It's gone nuts. It's not flowering yet, but it's formed a lot of flowerheads and promises to put on a show. I think this is a definite case of being a hydrangea that needs a LOT Of water. Other summers, it's wilted some on days with hot sunlight. (Yes, we do get a few of those days. Today is one). This year, the ground has stayed wet, the plant hasn't wilted at all and it's growing like a triffid. It's perhaps being inspired by being between the snowball hydrangea and 'Limelight' paniculata hydrangea, which I pruned hard this spring and which also went completely nuts as a result. (We'll see photos of it soon. Right now it's just forming its flowerheads.) Anyway, 'Endless Summer' looks like it's finally going to live up to its promised hype of the past few years.
Quite a year for hydrangeas, indeed.