Random thoughts in the garden 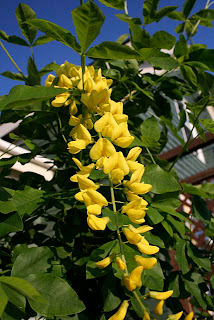 It's always a great hoot to discover that I've misidentified a plant. About four or five years ago, I bought this little twig of a tree sapling at a fundraiser plant sale at a local school. At the time, the foliage looked to me like it was Siberian pea shrub, as it was small and pea-like. I planted it, tended it carefully, and waited. No, I planted it and ignored it, basically, other than to give it a bit of a haircut in the spring if there were dead twigs. Figured it would bloom when it was ready to.

I was sitting on the picnic table the other night, drinking tea and forcing my fingers to remember some guitar chords, when something yellow caught my eye. Well. Guess it's not a pea shrub at all but a gold chain tree. (Laburnum anagyroides)That's actually pretty exciting, though I'm going to have to watch it to make sure it doesn't get too bid where I put it. 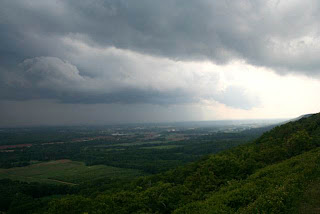 We've been experiencing some highly unsettled weather the past couple of days, with thunderstorms arbitrarily rolling in unannounced. And fog. Lots of fog. Today we had a storm roll in, have a hissy fit for a while, track off to the southeast...and then tonight, a dungeon of fog was lying around--but we could see stars overhead. Just like it was on solstice night. I suppose this means we're going to have a lot of fog this summer. Oh well, it keeps things from drying out. 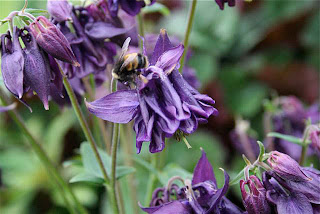 The Xerces Society for Invertebrate Conservation put me onto a project last year, tracking several different endangered bee species. Now, I happen to be a very happy fan of bees, especially native ones but also honeybees, and just take their pictures because I like them. Late last summer I took a photo that turned out to be the yellow-banded bee, Bombus terricola, which is one of the bees that are diminishing in populations. Now on calm days I stalk around the garden, camera in hand, trying to casually sneak up on bees and photograph them and figure out who they are. This little cutie hanging out on one of our gazillion columbines appears to be B. terricola, but I'll send a clearer photo to Xerces and see what they say. 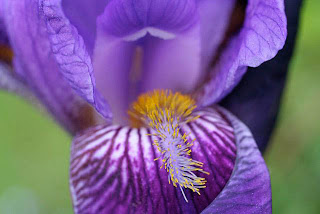 While I love the irises that some of my fellow garden bloggers have, I don't grow many myself. Some spring-flowering Iris reticulata, a few dwarf bearded and standard beardeds, and a few Siberian iris. But while roaming around the garden earlier this evening with my Macro lens on my camera, I decided to look at flowers from a different angle. THis one is quickly becoming a favourite. I think I'll get it enlarged and put it on the wall in here. 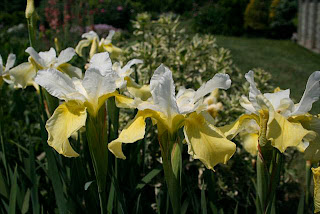 I love 'Butter and Sugar' Siberian iris, though it hasn't been real reliable for me. Something about the soft colours really appeals, although normally I go for more, shall we say, 'robust' colours. 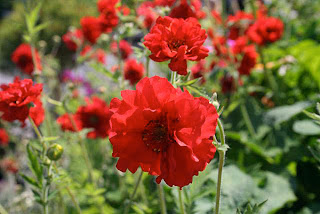 Like this 'Blazing Sunset' geum. I had to have it. Three of them, actually, because their colours just rocked my world. The secret to growing good geum, I have discovered, is to give them good drainage. And not mistake them for a weed and dig them up in the spring. Ahem. Yes, I have done so in the past. 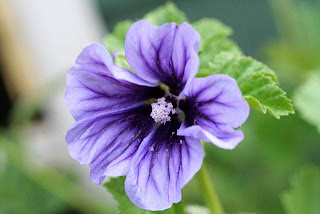 I've been muttering a bit about some nurseries not carrying a whole lot in what I'd call new and interesting plants. This isn't the case everywhere, mind you, but I was quite annoyed to go to one of the largest nurseries in the province the other day and find only a couple of perennials that I would consider purchasing. Especially since that particular nursery is getting ridiculously priced. Not all of us are rich doctors or lawyers from the city, after all. Here's one plant that did follow me home--Blue Fountains malva--more blue than the standard Zebrina malva, and I'm sure it will be as floriferous, though I don't expect it to selfseed like its sibling does. 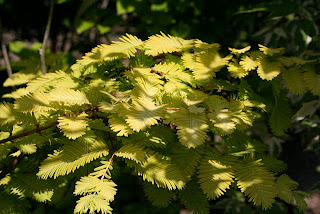 However, I found lots of good things at one of my favourite places to visit, Briar Patch Farm and Nursery in Berwick. Mind you, I didn't bring home everything I fell in love with. I haven't brought this gorgeous, glorious, magnificent Metasequoia 'Gold Rush' home with me yet, but I think I will bring it instead of the Sciadopitys (Japanese Umbrella pine) that I had been thinking about for a while. This will be more reliably hardy, and besides that--Metasequoia is one of my favourite trees. Bar none. 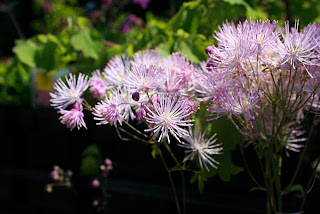 Ah, Thalictrum, or meadowrue. A lovely plant for shade or moist areas, and a fabulous butterfly magnet too. This isn't mine--it's not flowering at home yet, but it was putting on a splendid display at Briar Patch. 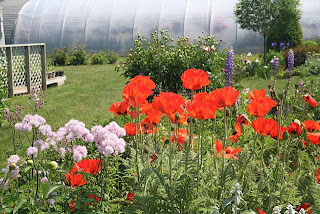 Yet another reason I love to make pilgramages to Briar Patch--they have excellent display gardens. Now, this particular bed might not excite some people, but it puts me into a fit of nostalgia. The lupins and poppies were star performers in my grandmother's yard, in her big old house which was and still is in Berwick. While we moved a lot when I was growing up because of my father's job as a pilot, we had two places that rooted us--our grandparents homes, in Lunenburg county and here in the Valley. My grandmother sold her home many years ago to some lovely people who were still living there a decade ago, when I stopped by the house and introduced myself, and Vivian kindly showed me through. It was really, really strange to go through a house I hadn't been in for 25 years, and have neat memories triggered as a result. 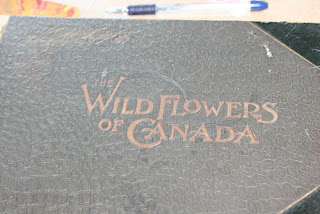 Today, I was out in my garden, and a car pulled in, and an elderly lady stepped out. "We're looking for jodi DeLong" she said.
"That would be me," I replied. I get this sometimes, people reading my columns and wanting to visit. No problem, though I warn them this isn't Martha Stewart's garden.

She then told me who she was. She and her husband are the people who bought my grandparents' home all those years ago. They still live there and are in great health. But they had acquired this old book from a cousin of hers, and she had thought of me and thought perhaps I would like to have the book.

I nearly fell over in delight. The book is The Wildflowers of Canada, which was created as a supplement to the Montreal Star newspaper many years ago. I can't find the exact date right now, but it was a big deal at the time, and though Lee Valley does a facsimile edition, I have a passion for old gardening books and I was really, really touched that Vivian would think of me and come looking for our place. We showed her, her husband and cousin around the garden, and she invited me to stop in the next time I'm in Berwick. Which I will surely do, as I'm there every few weeks, visiting my hairdresser...and going to Briar Patch, of course. 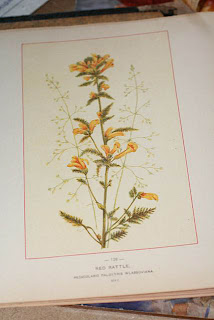