Where do we file a complaint? 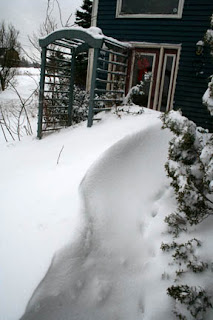 Last Sunday was April Fool’s day, and I expected a weather poisson d’Avril, as so often happens. Well, it was a week late, but it made up for that lateness with great zeal and enthusiasm.

Now, we’re not completely sure how much actual precipitation we’ve received. The wind hasn’t stopped blowing this week, but it ramped up Saturday night with great zeal and enthusiasm, and so we’ve had those ‘flurries where winds blow onshore’ along with the forecasted dumping of snow. Yesterday when we got up, we couldn’t see out most of the windows, because snow had been driven up against them, through the screens, etc. So when we opened the front door, this is what we were confronted with. In some places, it's about four feet deep...in a few rare spots, the ground is bare. Yesterday morning when I consulted the highway cameras around the province, we could see varying amounts of snow--and in some places in Cape Breton, none at all. Given that they got pounded a couple of weeks back while we had none, I guess turnabout is fair play, isn't it?

Today, it’s a bit milder, so that the snow has gotten wet and resists drifting, finally. My best guess is that we got around 9 inches of snowfall, which has rearranged itself into snow sculptures of this sort. 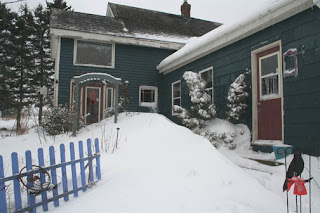 I console myself that it won’t last any amount of time. However, this means we’re going to have a LOT of snowmelt happen all at once. Good thing the sumppump is a heavy-duty one, or the basement would be wet.

The gardens are now back in suspended animation, with all bulb growth come to a complete halt. The snowdrops are buried under about a foot of snow, the hellebores are going to be mush after this, but on the other hand, the weeds also have stopped waking up.

My way of fighting this little session is to go plant seeds. On the weekend we moved the plant stand into the livingroom where it will get maximum light from the south and west windows, and now I’m ready to start planting. Many of the annuals I bought this year are best direct-sown (poppies, nigella) or don’t need to be started just yet (sunflowers), but others are going into the potting mix today. These include: 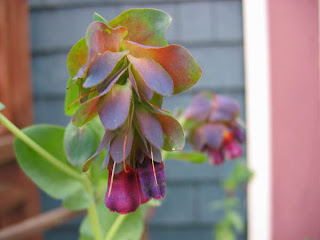 Rudbeckia Chocolate Orange (for a chocolate-and-wine theme garden I’m planning
Salpiglossis Royal Chocolate (ditto)
Lion’s Ear: often described as looking like a Dr. Suess Plant.
Nicotiana langsdorfii (green flowered species Nicotiana)
Phacelia: California bluebells; curiously, they do best before weather gets too warm, a trait I’d never have expected from a plant bearing that name, would you?
Blue Woodruff (Asperula) I’m very fond of this, and sometimes it does reseed, but I didn’t see any of it last year, so it’s time to start again.
Verbena bonariensis. A favourite of mine, as many readers know. I’m hoping that it will have self-seeded where it grew last summer, but in case it didn’t, I want MORE of it this year. Drifts of it, if possible.
Honey scented alyssum ‘Gulf Winds’. Really doesn’t need to be started early, but I want that fragrance around the deck and front step as early as possible.
Heirloom tomatoes: Summer Feast mixture, featuring Black KRim, Persimmon and Costoluto; Latah hybrids, early season ripening even in Labrador and the Yukon (so surely here!) Indian Moon heritage variety from Hope Seeds in New Brunswick.
Flower of an Hour (Hibiscus trionum.) A delightful relative of hollyhocks and hibiscus and mallows, with gorgeous greenish flowers with deep wine centres. 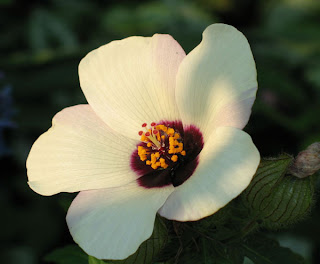 I learned a wonderful tip from Ron Robertson’s Growing Flowers from Seeds in Canada; start sweet peas in toilet-paper rolls, to allow for good deep root development and then they can be transplanted outside with minimal grief. I got a container-sized variety this year, 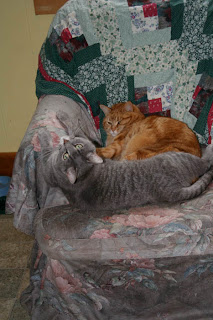 Suffice it to say that our little herd of feline family members are singularly unimpressed by this latest weather tantrum. Only four of them go outside—the four senior cats, who also remember to stay away from the road. The younger ones content themselves with watching bird television, as I’ve written before, and taking long exuberant naps.

Not to mention, being very good at helping me at my work. I don’t know what I’d do without Mungus’s able assistance as I write and research. Tigger and SimonQ, on the other hand, just want to sleep and look adoring. They're saving their energy up for later in the evening, when they can hurtle at top speed around the house, shedding hair like fall leaves and acting like they're all little cheetahs.

I just want to file a complaint with the weatherdivas! But I know it’ll improve. And given what Hanna wrote over at This Garden is illegal…we’re not alone in our weatherblues. 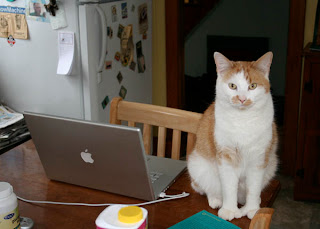