You know how so many plants at this time of year are in shades of russet, gold, orange, carmine, and so on? These are all splendid colours, but sometimes a gardener craves something to contrast and yet compliment the colours of fall. I think that’s why I’m drawn to plants like flowering cabbage and kale, butterfly bush, purple-foliaged shrubs, and any late flowering plants that come in magenta, purple, mauve…any shade of purple.

There are so many shades of purple—some of which horticulturists like to pass off as being blue when describing supposedly blue-flowered perennials—from pale mauve to deep royal purple and every shade in between. One of the stars at this time of year is an annual, Verbena bonariensis. It’s popping up in many fall issues of garden magazines these days, but I first learned about it from the late, much-loved and lamented Christopher Lloyd, the great British gardener whose motto was, “learn the rules of colour so you can break them.” (works for me). 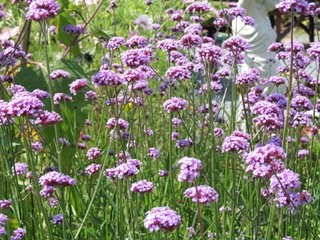 This verbena grows very tall—easily to five feet and has lacy clusters of small magenta purple flowers which besot butterflies. It is an enthusiastic selfseeder in many parts so I’m hoping that the few plants I have this year will selfseed into many more, the way the poppies, sunflowers and nigella do.

I’ve also succumbed to the urge to try Caryopteris ‘Dark Knight’ with its dazzling blue flowers; it will probably die down to the roots in our garden, but I’ve got a good sheltered spot for it too, where I can stare at its blue colour and be happy.

The other purple performer that threw itself at me today is ‘Purple Dome’ New England aster; I’ll have to tag it and plant it somewhere where I’ll KNOW I planted an aster, so as not to pull it out thinking it’s a wild one…a mistake I’ve made before. Tee hee.

Also wonderful in the line of purple are some of the heathers that are flowering now. I am fairly new to being infatuated with heathers and heaths, and I blame it primarily on Jill Covill and Jamie Ellison, who founded Bunchberry Nurseries in Upper Clements, NS. Jamie has moved on to teaching young horticulturists at the Kingstec Campus, but Jill has continued to grow the business, for years wholesaling fantastic plants to nurseries around the region. This year she opened a retail business as well, and she was one of the exhibitors at the Saltscapes Expo as well as at Agrifest. Anyway, Jamie and Jill smartly developed display gardens around their nursery, which are an excellent way of showing potential customers what plants will look like after they’ve been planted out for a few years. I challenge anyone to remain unexcited about shrubs, conifers, grasses or heaths and heathers after seeing some of the exciting and unique cultivars of plants available and hardy to our area. 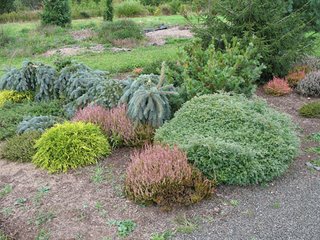 So last year, I bought half a dozen heaths and heathers, some from Bunchberry and several from Dick Steele at Bayport Plant Farm (another individual who has seriously influenced my plant tastes in recent years). I made a dedicated bed for them in the upper end of the yard where the drainage is not too bad, added lots of compost and peat to the soil, and planted them out. They survived, so I added another half a dozen this spring, all of which have settled in and grown nicely. They’re starting to flower now, AND to get their fall/winter colour, which is what really besots me about them. The fall colour of some of them, such as Spitfire, Wickware Flame, Cuprea and Con Brio is enough to send me into ecstacy—without ever even having a flower on the plants. But they’re ALL starting to blossom too, so I’m a happy—and hooked—heather addict now. 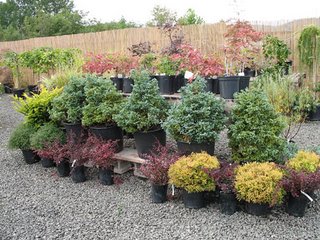 One thing I really noticed was how good the garden centre at Bunchberry looked—all the shelves and tables of plants were filled with healthy, well groomed and attractive species of perennials, shrubs and trees.

There was none of the tired, picked-over look that I’ve noticed lately at some garden centres. Here I and my colleagues in the garden-writing world are crowing about how we can still be planting all kinds of things, and then people go out to many local nurseries and can’t find anything worth planting? That’s not a good thing. It’s also, of course, not the case at every garden centre--things are looking great at some nurseries I've visited lately-- and I do know that our local operators are up against the wall having to compete with the loss-leader bigbox bullies…But this is a time of year when nurseries can be making some decent money and gaining new, loyal customers, by having great quality stock and a good variety, because there IS still plenty of time to be planting.

Another nursery that is looking mighty fine, as I remarked in my regular email newsletter, is Cosby’s Garden Centre in Liverpool. Ivan Higgins is another smart nursery operator who is big on planting display gardens, but he also has a secret weapon in his arsenal; he is a concrete sculptor who does amazing, whimsical and unique pieces, both for himself and for commissions. Each year he creates a new sculpture for the garden centre, and here is this year’s: 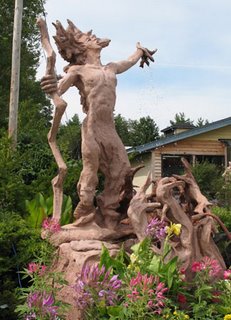 Ivan’s garden centre is so good, and his selection of unique and exciting plants so delightful, it almost tempts me to pull up stakes and move to the balmy south shore of the province, where I could exercise a lot more zonal denial and plant things I can only dream about now. But I can’t see digging up several thousand plants from here and trucking them all down there…plus my heart really is here. I’ll just have to live vicariously on the south shore through Ivan, Dick Steele, and other great gardeners who live in the banana belt.